skip to main | skip to sidebar

Unanimous Council Vote: No Development in the Woods! 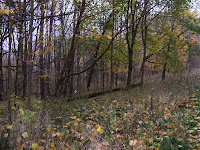 Last week we sat through a 3 hour meeting with a dozen of impassioned speakers, followed by a "compromise" motion that would still have seen much development in some of the woods and grave danger to much of the rest.

That was last week.
This is this week.

Tonight, the Woolwich Council voted unanimously to accept the Staff memo recommending the land not be surplussed, no residential development be undertaken, and the land come under consideration for re-zoning later this year or early next when the Official Plan revision is undertaken.

As one of the loyal supporters of Preserving Victoria Glen Park said, "we showed the community that when you feel strongly about something being right, you CAN affect political decisions!"

Of course, we'll keep an eye on this, and everyone is encouraged to get involved in the Official Plan review when it comes around to make sure the woods is protected - which the council indicated was their intent, but they need to follow the correct "processes."

In the meantime, though, WOOOO-HOOOOOO!
Posted by Friend of Victoria Glen Park at 6:24 PM 4 comments:

Council still has to vote, BUT: Staff recommends NO development 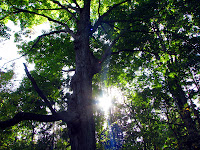 In a memo from Woolwich Township staff to the council this morning, they made the following recommendation:

"The consultation process for Victoria Glen clearly illustrated that the social, educational, spiritual, recreational, historical, ecological, and cultural value of the Township-owned parcels (Parcels 1, 2, and 3) cannot be outweighed by any funds that could be generated by the options described in this memorandum.

Staff would like Council to note that the existing sanitary sewer in the unopened road allowance shown on Map 1 will be upgraded in the next few years which will create some level of disturbance to the general area. Staff will communicate the timing of this project to Council and the public as soon as possible.

Through the 2010 budget process Staff will report back to Council with options for managing the funding implications of not proceeding with the deposition of the Victoria Glen lands."

There will need to be a vote by council tonight, of course - but things are looking brighter than they have for a long time. The five-page memo was careful, thoughtful, and as thorough as they could be given the constraints Council put on the process.

Still: do come out tonight to the meeting at 7!
If all goes as it looks like it might, we can applaud Council for their wisdom in accepting the Staff proposal!

(The 5-page memo with the complete staff recommendations will be posted to the Woolwich Township website - www.woolwich.ca - as soon as their "web person" can do it, according to staff. This should be sometime this afternoon yet.)

Posted by Friend of Victoria Glen Park at 8:56 AM 1 comment: 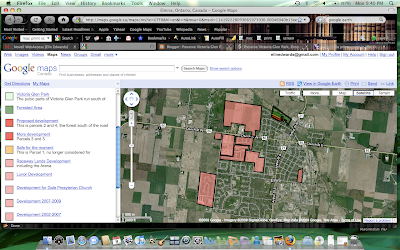 One of the "Friends of Victoria Glen Park" who is a wizard with various computer functions has put together this map, using the Google Maps satellite view of Elmira. The brightly coloured rectangle in the upper right is Victoria Glen Park -- the bright red section is the proposed development south of the upper trail in the woods. All the larger pink sections are sections that either have been developed in the last 10 years or so or are proposed for development in the near future.

This prompts the BIG QUESTION: why do they need to sacrifice any of the Victoria Glen Park woods for the relatively few houses it would yield in the face of all the recent development (and the proposed 900 houses in the Lunor development west of town)?

Oh yes, to pay for "capital projects."
Destroying part of the woods -- and putting at risk the rest -- for a one-time cash-out of the relatively small amount of $368,000 (which wouldn't even be realized until after a whole lot of spending for reports and infrastructure) just plain doesn't make sense.

Here are links to the map, reproduced above, and to another of just the "subject lands" in the Township report -- note that widening the trail to the 66 feet required of a street will take up a fair bit of the parcel last week's vote established as land they wanted to save...:

http://elmira-ontario.notlong.com
http://sobac.com/pvgp/#map
Posted by Friend of Victoria Glen Park at 6:31 PM No comments:

Keep on the pressure: Preserve ALL of Victoria Glen Park 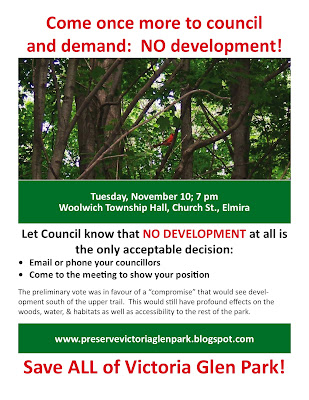 Posted by Friend of Victoria Glen Park at 1:57 PM 1 comment:

"Still on life support, it’s just a matter of time before the
Victoria Glen project comes to the end of the line."

(This is the "View From Here" cartoon in this week's Woolwich Observer. Please come out to Tuesdays council meeting, where the final vote on this project will happen -- November 10, 7 pm -- to show that we really, really are serious that it is totally absurd to even consider developing ANY of Victoria Glen Park.)

Posted by Friend of Victoria Glen Park at 11:20 AM No comments: 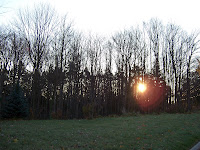 We spent more than three hours last night at the Woolwich Township Council "Committee of the Whole" meeting to act on the staff recommendations to develop Victoria Glen Park woodlands.

Six people spoke who had registered ahead of time and at least that many came forward when the floor was opened to whoever wanted to speak. Presentations ranged from a thorough and technical hydrogeologic analysis rejecting the wisdom of the project to the high school student who had started the "THEY'RE TEARING DOWN ELMIRA'S FOREST ANYWAY! STOP THEM!!" Facebook Group which had attracted, by the time of the meeting, more than 800 very vocal members. (As I write this, the membership is up to 909 members.)

Staff members clarified and defended their information and processes.

Council members attempted to indicate where their sympathies lay on the issue.

It was a passionate and confusing meeting all around.

The high point: When councillor Ruby Weber spoke about how her first introduction to Victoria Glen Park was on a bus trip organized by township staff a few years ago to look at possible surplus lands (in late fall, post-leaves) and she had thought it looked just like "scrub bush"; then, this summer, she actually came down and walked the trail across the top of the woods "one end to the other," she said, "many times." And she was struck by what she called the "magic" of our woods and finally understood what our fight was all about.

The low point: Being lectured on how democracy and balanced planning operate by township staff -- as though we don't already KNOW these things as we have chosen to actively participate in the democratic process, providing that public input governments seem to always be so desperate for.

Some interesting points:
Sandra Shantz's observation that, if we save and re-zone ALL of the Victoria Glen Park woodlands, that would be roughly equal in acreage to Southwoods Park on the south edge of town; Gibson Park in the centre of town; and would provide an equivalent access to wooded park for people living on the north edge of town.

Murray Martin's observation that an undisclosed number of unidentified people at an unidentified "function" have indicated that the minority "special interest" group such as the hundreds of people present at the meeting (and the thousands who have signed petitions) need to bow to the majority wishes, and that they support this development.

The detail that, once Parcel 1 (north of the top trail) is taken out of the equation, the net profit to the township would be in the neighbourhood of $386,000 rather than the $1.4-1.9 million that had been estimated as profit for the whole project. (The profit for the remaining parcels would be so much lower because it would still COST @$1.4 million to develop that section).

The strange point - was it a low point or just a very confusing plateau?: Trying to make sense of the "compromise" motion on the floor that proposed that the complete staff recommendations go ahead with the exception of excluding Parcel 1 from the process (this would still involve a lot of costly staff and consultant work). The confusion came with Mark Bauman's contention, as maker of the motion, that all he really wanted was township staff to spend "a little time" working on the negotiations with the Region to purchase the parcel next to Parcel 2, which is the only way any development would be practical.

The last points:
Mayor Strauss charged township staff with bringing back as much of the information that Councillor Bauman requested as they could to the November 10th meeting, next week, where the decision would be ratified.

It is clear, so far at least, that the intention of the whole council at this point is to initiate the process to re-zone the Victoria Glen Park woods NORTH of the top trail as parkland.

We left in a strange mix of euphoria at having saved half the woods, confusion over what was really happening with the compromise motion that was put forth, and determination to use this week to somehow ensure that next week's final vote, instead, begins the process to re-zone ALL of Victoria Glen Park as permanent parkland, accessible to all the public as that "magical" natural space we so treasure.

The next point: Next week's Tuesday meeting (November 10 at 7 pm) will include a final vote to ratify the compromise motion passed this evening. Or not. Delegations (speakers) are once again welcome (register by Thursday afternoon if you can) and we encourage EVERYONE to come out once again and bring our presence to bear on the decision-making process.

Thanks: to everyone who came out to the meeting, wrote and phoned and emailed the township councillors, spread the news of what was happening, spoke at the meeting last night, spoke to the media, etc., etc., etc. You are legion!

(And 1300 petition signatures + 900 people joining the Facebook protest group = at least 2000 people, 20% of Elmira's current population! A pretty good-sized sample of what very likely would turn out to be a majority if this were to be brought to a referendum!)

Tomorrow's the day: Spread the word and be there! 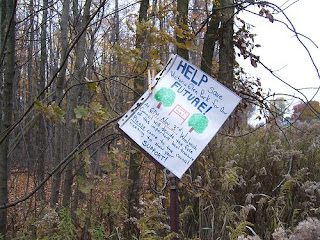 The council meeting to consider the staff recommendation to "surplus" 62% of the Victoria Glen Park forest for residential development is tomorrow, Tuesday, November 3rd at 6 pm in the township hall on Church Street in Elmira.
(By the way, the Facebook group, "THEY'RE TEARING DOWN ELMIRA'S FOREST ANYWAY! STOP THEM!!," now has 705 members.)

Remember: the meeting is at 6 this Tuesday!

Posted by Friend of Victoria Glen Park at 12:20 PM No comments:

Preserve ALL of Victoria Glen Park 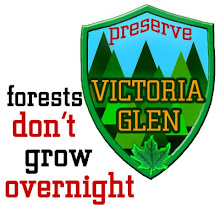 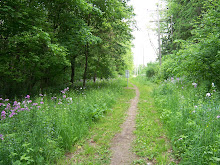 path through the woods - that would become the street extension, even if only the south (right) side is developed 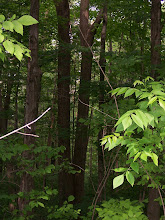 Path through the middle of Victoria Glen Park woods